"Never hold discussions with the monkey when the organ grinder is in the room."
~ Winston Churchill
A Few Cock & Bull Rule Variations 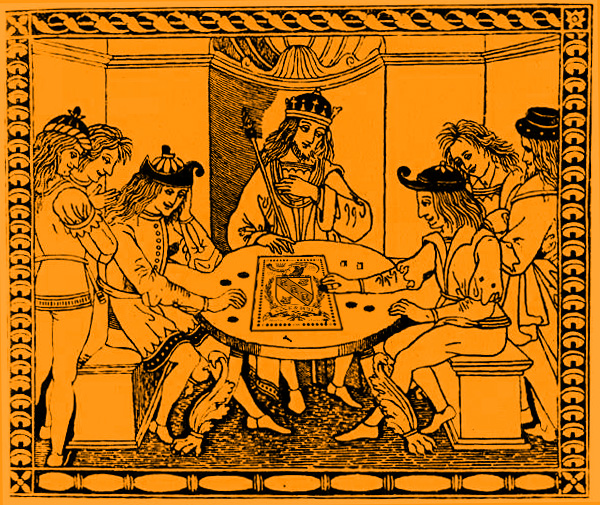 An example would be six players, each playing one game against the five other players. At the end of the tournament, each player will have played five total games, and the player with the most game wins would be the champion.

Ties in the number of game wins are common, so a player's total point score is very important because it will be used as a tie-breaker. This makes it easy to rank all six of the players as first through sixth place.

Taking the Arms by "Chipping-In" is worth 18 points plus any points that have been accumulated on the  Mantle. In this case the losing player will only score points from the  Mantle. The highest score possible by "Chipping-In" is 53 points (18 on the arms and 35 on the mantle). However, if a player should Chip-In before placing his (or her) peg on the Mantle, a special high score of 54 points will be awarded. This score is equal to the total combined points of the Arms and the Mantle.

When a player has "Pegged-Out" by accumulating 36 points on the Mantle, the game ends allowing both players to score points with their chips on the Arms. A chip on the Crown is worth 6 points, a chip on a Bull is worth 3 points, and a chip on a Cock is worth 2 points. The highest score possible by "Pegging-Out" is 52 points (16 on the arms and 36 on the mantle).

Hard Core
This is for players who get REALLY annoyed when their opponent commits a party foul during the game. Should one of the dice "Hit the Deck" or land on the floor, the player who rolled loses all his chips that are on the game board.

Should a player commit a "Sticky Finger" or not completely release their peg after moving it, thus pulling said peg out of its hole causing it to land on its side, or drop their peg while moving it, the offending player must place their peg on the table and start over.

Playing with a Handicap
This is easily done by allowing one player a certain number of points on the Mantle at game start. Simply place that player's peg in the hole representing the number of points allowed. A chip on the crown could also serve to handicap a player.

The Short Game
At game start, both players are allowed a certain number of points on the Mantle. To cut game time in half, both pegs can start in the eighteenth holes on the Mantle. Either player can  play with a handicap by simply changing the point where their peg starts.

Playing with Teams
Adding people to the game always seems to livens things up a bit more. The official game rules still apply here, the only difference is that you will play with a partner instead of alone.

Your partner will sit opposite of you at the table, your opponents to your left and right. When you lose your turn, forfeit the dice to your opponent on the right. The dice will move around the table in a counter-clockwise direction back to you as players lose their turns.

The advantage and fun of playing as teams is the extra pair of eyes on your game, and the enthusiastic heckling and cheering your partner can add to your own.

For even more fun, additional people can be added to each team. As long as there is an even number of people, and you are seated between your opponents, team play works the same way.

You can also play with an odd number of players, 1 versus 2, or 2 versus 3, it's just a little harder to keep track of who's turn it is.

Pass the Monkey
For an additional dose of mirth during team play, try a few rounds of "Pass the Monkey." This version of the game adds a token, or "Monkey" that can be passed from player to player around the table.

The token can be anything you want... a sock monkey, a plastic banana, a hacky sack , a coin, a hat, a necklace, a bracelet, a shot glass, whatever.

The official rules still apply in this game, and the first player will hold the token at game start. Whenever a Monkey turns up on any dice roll, the token will move to a different player, no matter who is rolling the dice.

Also, during game play when a pair of monkeys is rolled, the player holding the token can be immediately penalized or rewarded at that time.

Creativity counts in this game, and how you choose to reward or penalize your players is entirely up to you. No matter what you come up with, the whole point is to have fun!

Bull Monkey
In this version of the game, the 'Bull & Monkey' roll is used to effectively turn Cock & Bull into a drinking-game. When you roll the Bull & Monkey, not only do you lose your turn, you must also drink. Unless of course you are able to make 'Bull Horns' by extending your index fingers from your forehead before your opponents can yell, "BULL-MONKEY!"
HOME
Please send questions or comments to: cockandbullgame@gmail.com
Created By F. M. Smith  |  Copyright MMXVI  |  All Rights Reserved