“Monkeys are superior to men in this: when a monkey looks into a mirror, he sees a monkey.”
~ Malcolm de Chazal 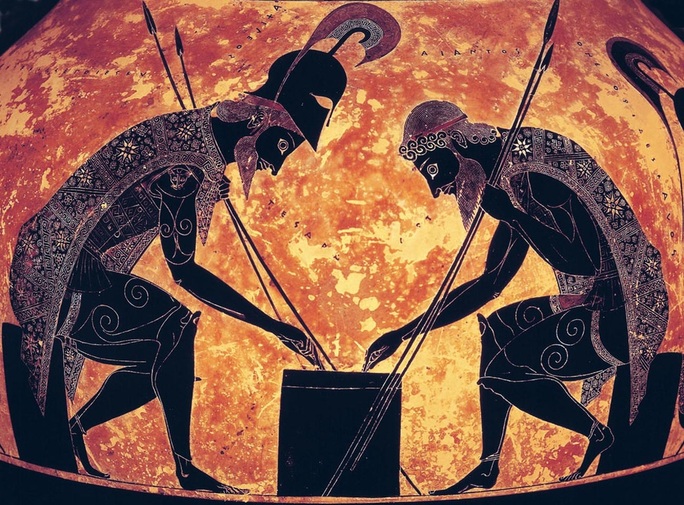 Game Strategy
The game board is really a reflection of the six faces of the Cock & Bull dice. In its Coat-of-Arms design, there are three Cocks on the Bend matching three faces on each die, two Bulls on the Field matching two faces on each die, and one Monkey on the Crest matching one face on each die. The Mantle contains thirty-six holes for each player, coinciding with the thirty-six possible outcomes that can be rolled with a pair of six-sided dice.

The most common roll of the dice in this game is of course the game's namesake, the Cock & Bull. With a 1 in 3 chance, this roll can rapidly move a player's peg along the Mantle, or alternately wipe an opponent's chips off the game board. The strategy of the game lies in the choice a player has of either scoring a point on the Mantle, or removing an opponent's chip from the board when a Cock & Bull is rolled. Of course when your opponent has no chips on the board there is no choice to be made, and therefore no strategy at all.

The odds are 1 in 4 that you will roll a pair of Cocks and be able to place a chip on the Bend. Do this three times and you have taken the Bend, provided your opponent hasn't removed or flipped any of your chips first. Placing or flipping a chip on the Field with a pair of Bulls is not so easy; the odds are a much higher 1 in 9. The fact that there are only two Bulls compared to three Cocks does not quite even out the odds. It is still more difficult to take the Field than it is to take the Bend. Taking the Crest with a pair of Monkeys is by far the most difficult roll of the dice to achieve, a 1 in 36 chance.

Steak & Eggs...
The dilemma: You have rolled a Cock & Bull, and you want to remove an opponent's chip from the Bend instead of taking a point. There is a 1 in 4 chance that your next roll will be a pair of Cocks which would allow you to flip your opponent's chip anyway, so you consider taking the point. However, you remember that the odds are a slightly Lower 1 in 3.6 that a Monkey will appear on one of the dice, causing you to lose your turn. If your opponent has already taken the Bend with three of his chips, he also has a 1 in 4 chance to roll a pair of Cocks and score 2 points to boot, in this case removing one of his chips before that happens may be the wiser choice.

Even Monkeys Fall from Trees...
Taking the crest with a pair of Monkeys can put you well on your way to taking the Arms. However, having your chips on the shield is the only way to protect your Crown from being overthrown. Your opponent must first remove all of your chips from the Bend before he can remove any of your chips from the Field. When you no longer have any chips on the Shield, your Crown becomes vulnerable . Of course there is always the chance that your opponent will roll a pair of Monkeys and flip your Crown in a coup d'état, a 1 in 36 chance to be exact.

2 Monkey Good... 1 Monkey Bad.
If you play the odds much you know that things tend to even out over time. But occasionally you will get a hot streak and achieve the improbable and seemingly impossible. You roll a pair of Monkeys and get your chip on the crown, and then roll Monkeys again and again to climb the mantle six points at a time and quickly "Peg-Out" for a win. On the other hand, a single Monkey can pop up on every roll preventing you from scoring any points, leading to a quick defeat and the frustration of feeling cursed.

Flip the Bird!
The Bend is where the most activity usually happens. With a 1 and 3 chance for a Cock & Bull, and a 1 in 4 chance for a Pair of Cocks, the chips will flip and fly on and off of the Bend constantly. Because of this, a common mistake is to place a chip on an empty spot when you could have flipped over an opponent's chip that was already there. This can be a costly mistake, and one to avoid in tournament play. It always makes more sense to flip your opponent's chip when you roll a pair, that way your opponent will have to roll an additional pair to get that chip back. This is the only choice that can be made when a pair is rolled, however there should never be a question as to what the best choice is, unless you are trying to let your opponent win.
Additional Round-Robin Style Tournament Strategy
The Flying Monkey
When playing for points in a round robin-tournament, the strategy is a bit different at the start of the game for those who would seek the coveted 54 point special high score. The only way to achieve this is to chip-in before you have scored any points on the Mantle. Normally when pairs are rolled, a player will always flip over an opponent's chip that is already on the game board rather than put down a new chip. It just makes sense to take that chip away from your opponent. However, in an effort to avoid being forced to take a point on the Mantle when a Cock & Bull is rolled, a player might do the opposite and place a new chip on the board instead, leaving his opponent's chip there to be removed later should a Cock & Bull turn up on a future roll.

Winner! Winner! ...No Chicken Dinner?
When a tournament match  stretches out until one player has scored 35 points on the Mantle and is about to "Peg-Out" for a win, it is not at all uncommon for the other player to have scored a far lower 16 points or less. Should the lower scoring player turn the tables and "Chip-In", he will still be out scored in points by his defeated opponent. This can make a difference in round-robin play when the points are tallied for a tie breaker.

Bull Monkey!
When both players are close to "Pegging-Out," a battle may ensue over points on the Arms. When a Cock & Bull turns up, the strategy really kicks in to high gear. In Round Robin play, most players will at some point try to wipe the board clean of an opponent's chips before taking the win to reduce their opponent's point score. However, this plan can often backfire ending in defeat.
HOME
​Please send questions or comments to: cockandbullgame@gmail.com
Created By F. M. Smith  |  Copyright MMXVI  |  All Rights Reserved