Long Live The Monkey Paw!
Six Years of Great Memories
Our Mission:
To enjoy the greatest beers on the planet while playing our favorite game! Oh, and to also enjoy great food, friends and music in a neighborhood pub atmosphere. Mainly it's about having lots of fun!
It's always free to play and takes just minutes to learn so why not come and join us?

Cock & Bull 101:
The usual Monkey Paw crew will now meet on the second Tuesday of each month after 7 pm at Stout Public House in San Diego. From 7-8 pm beginners can learn, and the experienced can play for fun with other fans of the game. If you have a game board of your own, please bring it along!

The Cock & Bull Cup:
Even a beginner can win this monthly modified double-elimination style tournament. Nothing is required to join in, just show up, sign up, and then play with us, the bracket has room for up to 24 players! The tournament begins right after 8 pm and the winner will get a cool prize!

How the Cock & Bull Tournament Bracket Works:
This unique double-elimination style bracket is designed specifically for Cock & Bull. When we hit exactly four, eight or sixteen players, everyone has equal opportunity of winning. The bracket is not always even, so random players may get a bye, or possibly face sudden-death in the first round.

Players are slotted by number in the order they walk into the pub. The numbers in the "Premiere Bracket" are scattered to allow for any uneven number of players between two and sixteen. This also serves to pair players up with people they did not walk in with, this is how we make new friends!

At sixteen players or less, the green slots of the first round in the "Premier Bracket" offer a "Second Chance" to the losing players. Any player who loses their first game moves down to the corresponding A through H slots in the "Second Chance" bracket.

When there are "Overflow" players (seventeen to twenty-four) they are slotted into the A-H slots of the "Second Chance" bracket by drawing the letters A-H randomly. This will cause corresponding green slots in the "Premier Bracket" to randomly become sudden-death because there will no longer be an open slot for them in the "Second Chance" bracket. Unfortunately, overflow players face sudden death in every round, so to avoid that fate it pays to show up early!

When there are sixteen players, the "Champion" will be the first player to win five games regardless of which bracket they come from into the final round. A "Champion" that comes from the "Second Chance" bracket will have played six games, winning five and losing one. 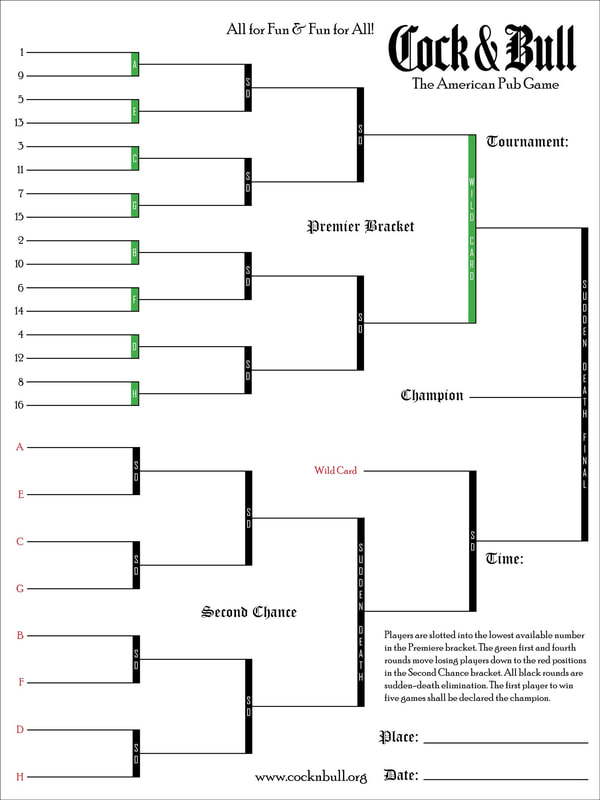 The Golden Goblet of Glory:

Affectionately known as "The Cup," this hand made,
1 pint tankard serves as a traveling trophy and a symbol
of the Cock & Bull Cup defender. A tournament winner
immediately becomes the defender of the cup, and
retains the vessel of victory until the next tournament.
Should the defender be defeated by a challenger,
the cup will pass on to a new Champion.

Tradition holds that only cup defenders are allowed to inscribe their name on the cup, and this happens immediately after the tournament ends right inside the pub! Plus, the player who shows up and wins the most games during the year keeps the cup and we start with a new one next year!
There's No Strangers Here...
HOME
Please send questions or comments to: cockandbullgame@gmail.com
Created By F. M. Smith  |  Copyright MMXVIII  |  All Rights Reserved