Beware of  "The Rootbeer Kid"

Now don’t let “The American Pub Game” slogan fool you, kids as young as three years of age have been known to destroy even the most seasoned Cock & Bull gamers. Yes, grandkids can teach their grandparents how to play and vise-versa.  Family friendly? Sure, but watch out for the little guys, they crave the rush that comes from taking down an opponent five to ten times their age with a satisfying, “In your face Grandpa!”
A Few Testimonials:
The funniest thing about Cock and Bull to me is that you can be a completely pragmatic, un-superstitious person, but when you get really caught up in the game you'll BELIEVE that you can make your opponent lose a turn by yelling "MONKEY MONKEY MONKEY MONKEY!"
You laugh, but I've seen it happen. Never to ME of course... no never...   ~ Elizabeth

When you say it, make sure you say it an EVEN number of times...   ~Mark

A homeless guy swiped our game bag, he must have thought it was a little sack of gold...  ~Kathy

My six-year-old was an addict in about five minutes. Major kid appeal!  ~Brad 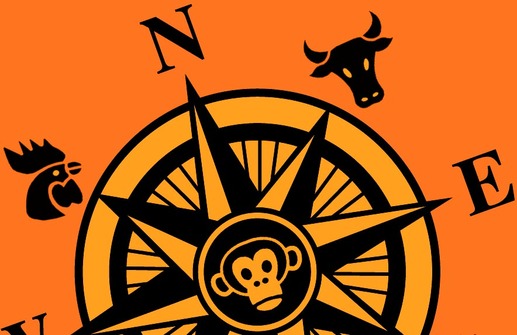 Be there around 7:00 PM, if you are up for it, come out and play!
As usual, parking can be an issue, so be prepared.
February 6, 2011
Super Bowl Party
Arizona
Hey wait, is that a banana in your pocket?

Leave it to my cousin Laurie to kick the mythical bar of mirth up to the next notch. In an effort to coax the mischievous monkey out from hiding, plastic bananas were employed as taunting tools in a pregame Cock & Bull tournament. Why not real bananas you might ask? Well that might be well and good for a real monkey. Besides, real bananas squish easily, and certain monkey-like players might be inclined to eat their own not-so secret weapons, rendering themselves unarmed.

This should serve as a wake-up-call to all of you gamers out there to be prepared for surprises the next time you engage in a match. Whats next, gorilla suits, fake-poo flinging? GAME-ON! 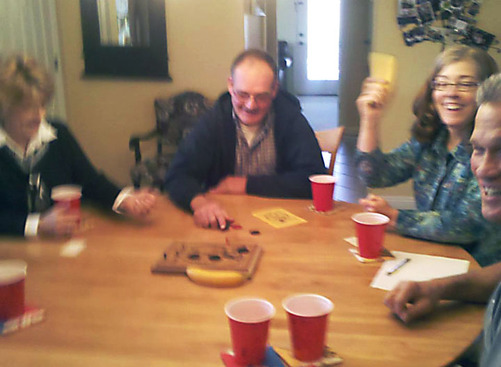 People will remember 2010 as the year without a summer (almost). The untimely gloomy and rainy weather threw a curve-ball at the plans of locals and tourists alike throughout July and August. Then bam, 108 degrees in Carlsbad. Nothing like a 30 degree temperature swing to make everyone sick. We were all busy scattering off in different directions on vacation or with family anyway, so I had no plans to get together with anyone until the traditional beach and camping season was over and done.

The "Cock & Bull Brigade" was chomping at the bit to do something, and the consensus was to head over to Small Bar again. My wife and her mom wanted to see for themselves what I had been talking about, so we hooked up on a Saturday this time. We arrived around 3:00 PM and had a very different experience than the first time. It was very laid back, and the crowd never grew much over 20 people until we left around 8 o'clock.

Unfortunately, not everyone who wanted to come could make it on this date, so we will definitely do it again at another venue sooner rather than later. I figure that the best season for playing the game runs from October - March, so check this page regularly if you want to make the next date. I will try to plan something once a month and post the time and place at the top of this page as soon as I can confirm anything. 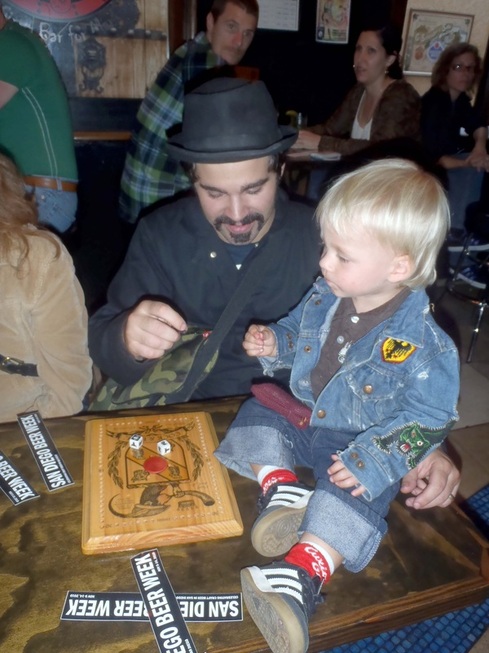 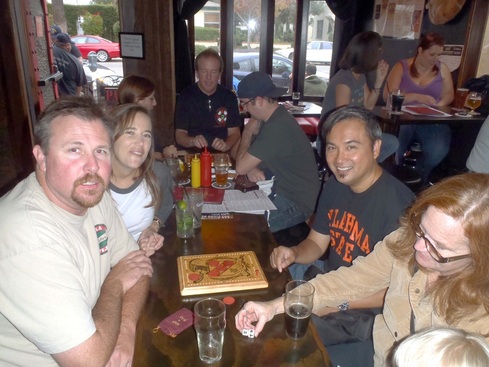 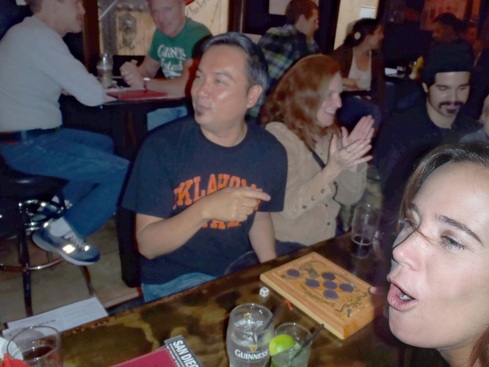 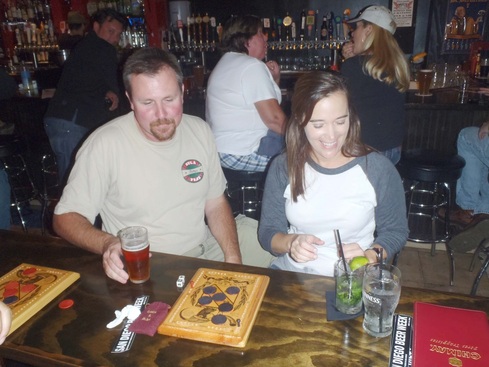 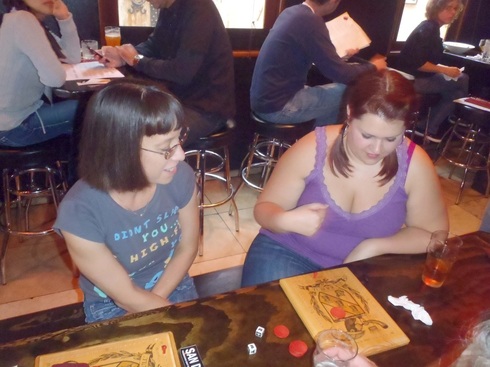 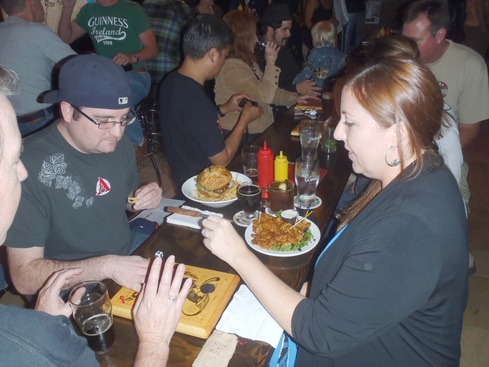 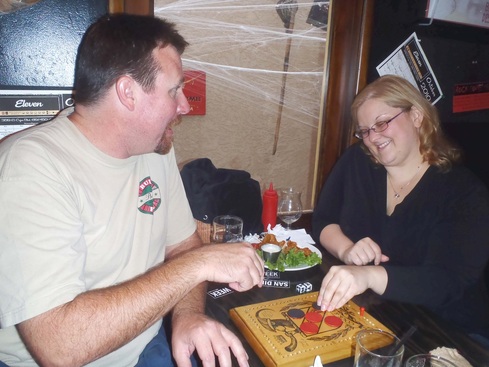 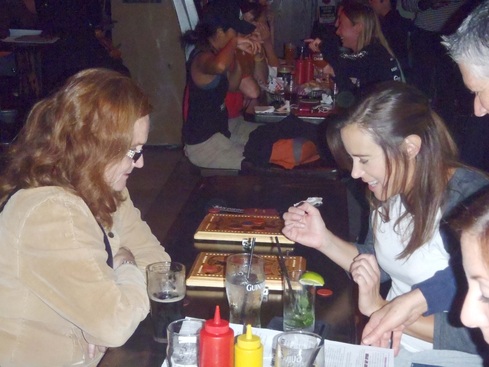 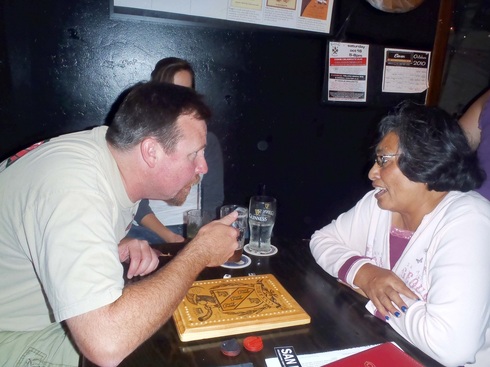 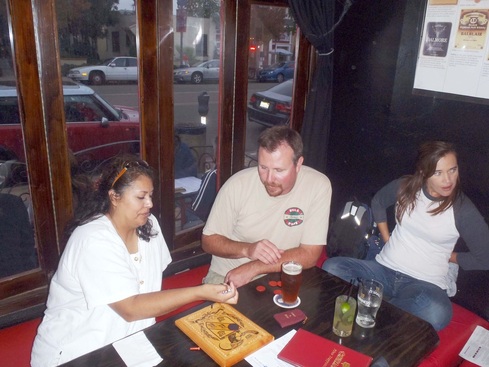 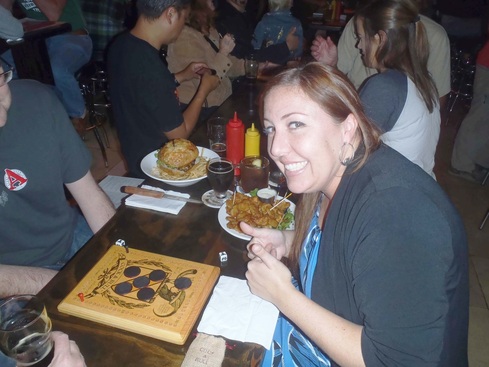 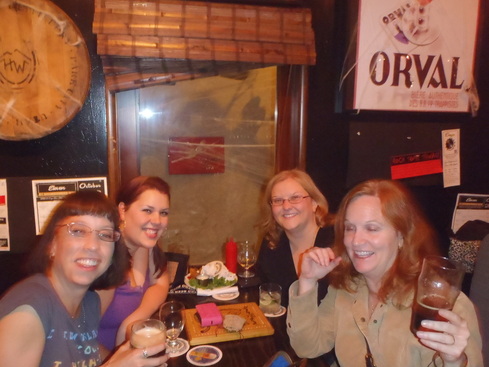 At approximately 3:00 PM on a Friday, Chris and I headed over to Hamilton's Tavern in South Park to commandeer a table when it opened. Hamilton's is a near mirror image of Small Bar, but slightly larger with an even more local neighborhood feel to it. Hamilton's has an amazing tap selection, pool tables, shuffle board, and thick and rustic wood tables.

I was surprised to learn that Hamilton's is a "Dog Friendly" tavern with a variety of breeds on hand to perhaps act as designated walkers to guide their masters home when the time comes to leave. The dogs were just as friendly as the patrons, as well as was the staff on hand who were serving up the best brew and food that money can buy.

Hamilton's Tavern and Small Bar have the same owners, one of whom as it turns out is very enthusiastic about the game of Cock & Bull. The afternoon got off to a slow start, but when a few of Chris's friends showed up we got around to playing some games.

Chris was acquainted with Scot the owner, and was finally able to flag him down and introduce us. Chris introduced the game to Scot a week prior to this evening, and Scot was quick to point out that he was able to learn the game and remember the rules even in an ale friendly environment.

After playing a few games, Scot offered to buy ten games and make them available to the patrons at his tavern sometime in the near future. With a little luck, Hamilton's and Small Bar could be ground zero for a Cock & Bull craze! 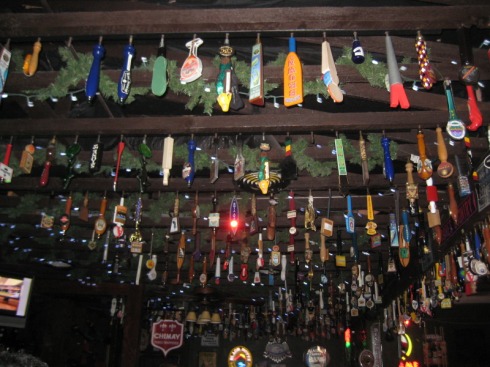 A multitude of beer tappers decorate the ceiling just in front of Hamilton's bar. 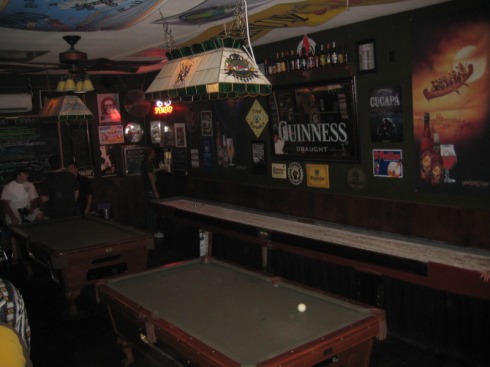 Two pool tables, and a shuffleboard table add to the fun environment at this neighborhood ale house. 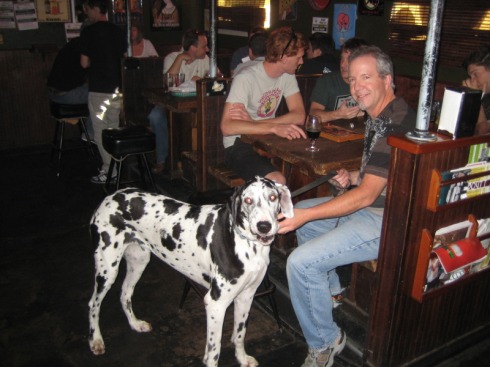 Here I am, giving a welcome scratch to one of the many designated walkers of the evening. 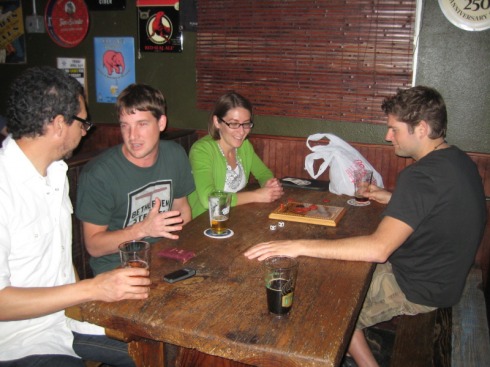 Chris's wife Heather showed up to play some games and keep us out of trouble. 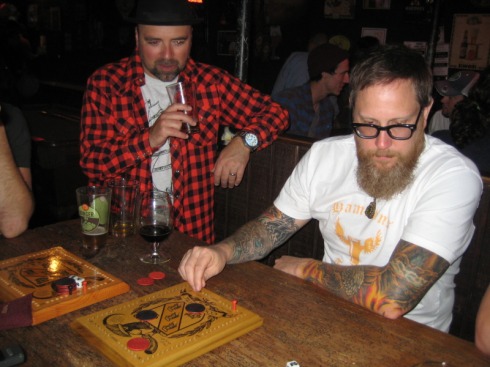 Luck was on the side of Scot Blair, one of the owner's of Hamilton's Tavern and Small Bar.
April 16, 2010
San Diego, CA

This was a private party hosted by my friends Chris and Heather. There were about 12 people at this gathering, which presented the perfect opportunity to try out some tournament play.

Eight people were divided into four 2-player teams for this tournament. Two game boards were used so that everyone could play simultaneously.

With a little pizza and beer thrown in as a primer, game play quickly brought mirth and mischief to the bumper-pool table that the players were gathered around. The table's felt surface was perfectly suited for dice tossing, and it's raised edge prevented the dice from flying onto the floor.

Music and Laughter filled the room during game play which evolved into heated competition. Win or lose, everyone enjoyed the game and will be back for more again I am sure.

This was a learning experience for me as far as structuring a Cock & Bull tournament goes. It definitely influenced some change to the tournament rules page. Of coarse, the whole point was to have fun, and everyone did.

Kudos to Chris and Heather for being wonderful hosts!

This was the first ever organized Cock & Bull game event. It was basically a group of my co-workers who had expressed an interest in learning how to play. I brought 2 game boards into the packed and extremely loud Small Bar a little before 7 pm on a Friday night not quite knowing what to expect.

I wanted  to play the game at a public venue where I could see the reactions of random strangers who were passing by our table. Knowing the mirth and merriment that the game tends to provoke, I was hoping that people might be attracted to our table expressing interest and asking questions.

I explained the basics of the game to my friends who then proceeded to play, and before I knew it, my friends were teaching several patrons how to play. If anyone watched our table long enough, they were invited over to give the game a try. Some new enthusiasts stayed for an extended period of time and played several matches. I stayed until they booted us out at 2 o'clock.

The game proved to be a hit with virtually everyone who tried it. I could not have hoped for a better reaction from the public and outcome for the night. I am sure that this experience will lead to another event in in a public place sometime soon.

Small Bar was a packed house, with great people, great beer, and a juke box cranked up to eleven. 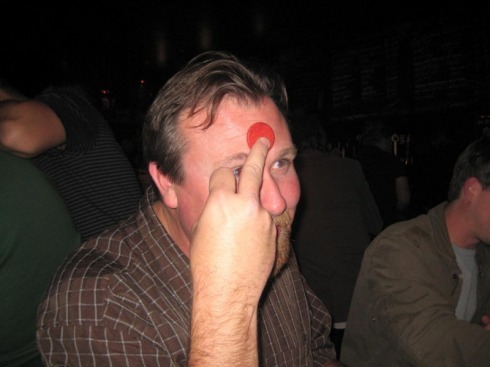 My buddy Colin incorporating his own unique style of psychological warefare. 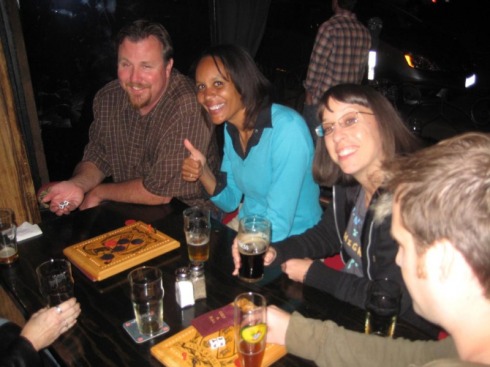 A total stranger sits between my friends Colin and Elizabeth and gives me the thumbs up. 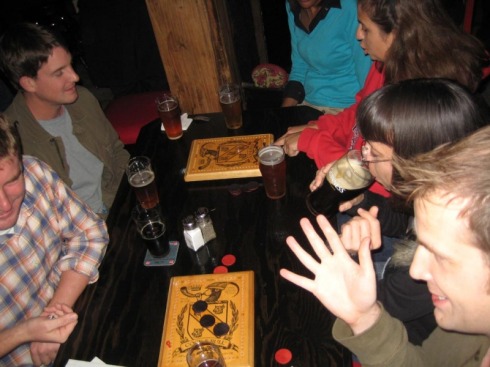 My buddy Mark on the right offers some tips on strategy to an enthusiastic new player. 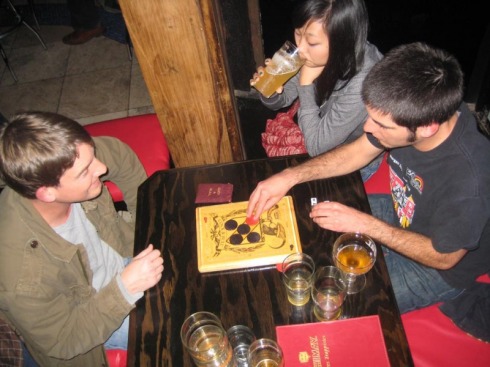 My buddy Chris takes on some new opponents who were waiting in the wings and eager to learn. 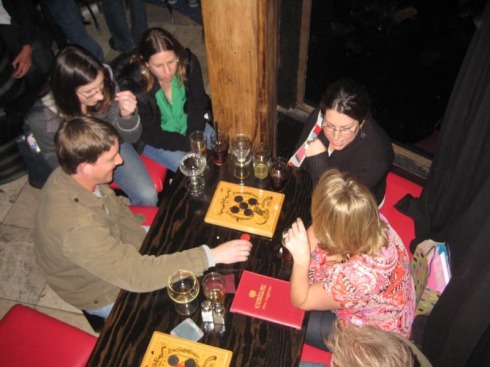 Chris was a busy dude training frour more patrons who joined our table to try their luck. 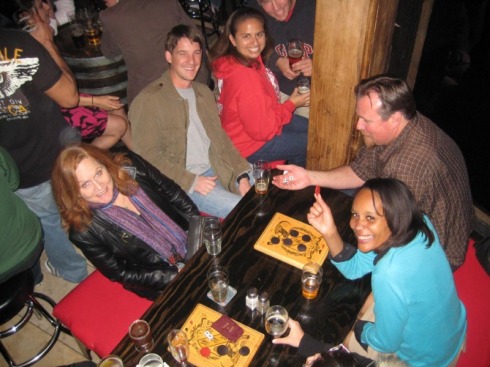 My friends, Patty at left, Chris, and Colin, having fun with our new friends from Small Bar.
If you have a suggestion for a future venue where good people can gather for some casual game play, or perhaps a more organized tournament, by all means let me know.

Any future public events will be posted here in the hope of your attendance!
If you are interested in Hosting or attending a future event, please send me an email at: cockandbullgame@gmail.com
Created By F. M. Smith  |  Copyright MMXI  |  All Rights Reserved